Sonia Shell began playing banjo at age 15 in the high desert area of Southern California. She was lucky enough to have lessons with Craig Smith in San Bernardino and get to attend shows at the Penny University. She formed her first band in high school and entered local banjo contests at the Calico and Idylwild festivals.
In 1977, she moved to the San Francisco Bay Area to attend college. When assigned the task of interviewing someone in her chosen career field, she went to Paul's Saloon in San Francisco and interviewed Larry Cohea of High Country. A job bartending and waitressing at Paul's gave her the opportunity to make Irish coffees for many bluegrass luminaries. Sonia also performed at Paul's with her band, Pick of the Litter.
Sonia played with Sidesaddle for many years, touring and recording three albums with them. In 1993, she won 2nd place in the Winfield Kansas bluegrass banjo competition. She was a member of The All Girl Boys, Harmony Grits and other local Bay Area bands. She has recorded on many projects and is currently working on a collection of original music with her partner, Sadot Canseco.
Sonia has been teaching private lessons since 1984. She offers a jam class every summer. She has also completed a three-year training course to become a certified teacher of Alexander Technique, a method to promote lightness and ease while playing, singing and performing any activities. She welcomes students of banjo, guitar, and those interested in studying the Alexander Technique. 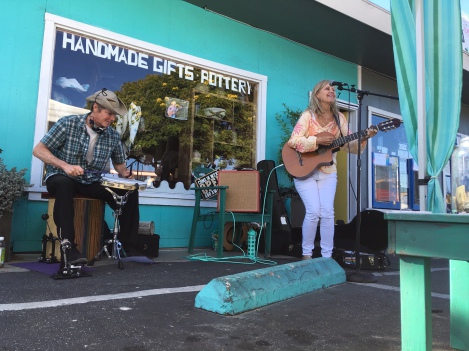 To schedule lessons or to just say "Hi," please contact Sonia via the Contact link (preferred), or via email at sonia@soniashellbanjo.com

Pictures of how Sonia (and her students) make music! Check them out here.